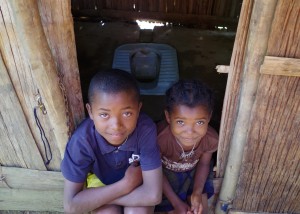 Climate change, humanitarian and natural disasters are putting sustainability, of both infrastructure and service delivery in focus for the water, sanitation and hygiene (WASH) sector. Rural communities in regions where sanitation is lacking under normal circumstances are particularly vulnerable to disaster, as they may abandon good hygienic practices.

The community-led total sanitation (CLTS) approach mobilizes communities to use their own initiative to build one toilet per household. Health benefits are felt when there is zero contamination of feces through food preparation, flies or water collection. That’s the ‘total’ in community-led total sanitation and when communities understand this, they hold each other accountable to the collective commitment.

In the Global Sanitation Fund-supported programme in Malawi, more than 1,000 communities had been declared open-defecation free through CLTS, but the rains in January 2015 were disastrous. Floods have made it difficult to assess damage to sanitation infrastructure in villages now only accessible by boat. However, programme implementers say some communities which were open-defecation free have now slipped back to open defecation because their toilets were destroyed.

Through Global Sanitation Fund financing of CLTS programmes, when the water recedes, the community commitment to be open-defecation free remains. Although Disaster Risk Reduction is not built into programme tracking at the moment, there is evidence of better resilience of communities which have been ‘triggered’ through the behavior change approach to sanitation.

In communities on the East coast of Madagascar, CLTS ‘triggering’ or facilitation sessions led to every household building a latrine. When a cyclone hit in 2013, toilets were destroyed along with everything else.

Didier Sampy rebuilt his family’s latrine immediately. He says, ‘we used to always have diarrhea. We prefer the latrine, you don’t have to go far from the house and there are no feces everywhere’.

Because the GSF-supported programme puts communities in the driving seat, they can adapt the shape of the structure. Toilet walls in this community in Madagascar are now sturdier and the shape of the roof is built to better resist violent storms.

Didier did more than modify the walls and roof when he rebuilt his latrine, this time he built a toilet with a ceramic slab. He’s a trained sanitation mason and installs slabs for customers so he thought, ‘why not have one at home?’ Ceramic slabs are more durable and easier to clean, so more hygienic.

The community now counts more latrines after the cyclone than before, according to local NGO Mambizo, the community sanitation facilitators. They’ve helped inspire more than 2,000 latrines to be built by communities in this region.

‘Once people’s attitudes have changed, there’s no turning back to open defecation, even in the face of a natural disaster’, says Jean-Claude Ramiandrisoa, director of monitoring and evaluation for Mambizo.

Kate Anderson is a writer, editor and project manager with the Water Supply and Sanitation Collaborative Council. WSSCC advocates for the billions of people worldwide who lack access to good sanitation, shares solutions that empower communities, and operates the Global Sanitation Fund, which since 2008 has committed US$86 million to transform lives in developing countries.