Armenia and the Hyogo Framework for Action
By Arman Tsolakyan 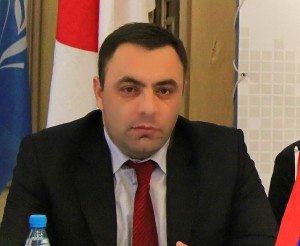 Armenia, as a country where disaster risks from hazards such as earthquakes, landslides, hail, drought, floods are very high, is looking forward to the results of the upcoming World Conference on Disaster Risk Reduction in Sendai, Japan. In Armenia, the damage caused by disasters from natural hazards average US$33 million  per year. The country is also vulnerable to a variety of man-made disasters caused by accidents on pipelines, various industrial plants, etc. Environmental degradation and climate change are also among the country‘s sustainable development challenges.

Realizing the enormous threat that may be caused by severe natural and man-made hazards, Armenia seeks to achieve the strategic goals of the Hyogo Framework for Action 2005-2015: Building the Resilience of Nations and Communities to Disasters, and has already taken a number of important initiatives in this direction.

The Ministry of Emergency Situations of the Republic of Armenia believes that the decentralization of the implementation of the Hyogo Framework for Action contributes to national capacity-strengthening for disaster risk reduction. It will also help to more effectively reach out to the community. Our principle is to create a strong center with resilient communities. We hope that this issue will be discussed by participants during the WCDRR in Sendai.

The participation of our capital, Yerevan, in the Making Cities Resilient campaign can be considered as another step in this direction. The population of Yerevan has reached 1,119,000 people and constitutes 34.4% of the total population of Armenia. The certificate for joining the campaign was signed between UNISDR and the Yerevan Mayor’s office. Thus, the Yerevan Mayor’s office has made a commitment to implement the ten points for making the city resilient to disasters.

As a result of joint efforts and fruitful cooperation with a number of UN agencies, international organizations and donors, disaster risk reduction has become a priority in the long term development plans of the country.

To build a culture of disaster risk reduction, the Government of Armenia in close cooperation and with the support of UN agencies created the National Platform for Disaster Risk Reduction, ARNAP, the first in this regard in the region. The ARNAP provides an opportunity to involve all the potential of our country in the fight against disasters, starting from governmental and self-governmental bodies up to non-governmental, international and private organizations, academic institutions, individual experts and the media.

The Platform also takes into account the aspects of gender equality and integration. At present, the National Center for Crisis Management has been established, and regional centers for crisis management are in the process of being setting up.

Disaster management cannot be the monopoly of any institution, including the Ministry of Emergency Situations. Sustainable development requires the participation of all institutions in the country. The program of disaster risk reduction as well as the government-approved project for the establishment and development of social, volunteer rescue movement also contribute to this goal. This will provide an opportunity to train more people and involve them in the process of disaster risk reduction.

In conclusion, I would like to say that after joining the Hyogo Framework for Action, Armenia has recorded significant achievements in the field of disaster risk reduction. I strongly believe that with adoption of the global post-2015 framework for disaster risk reduction in Sendai we will get an effective instrument to make our countries and communities more resilient to disasters.