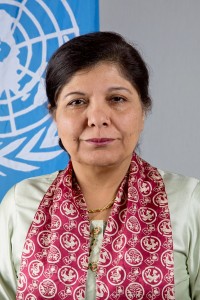 World leaders and decision-makers from more than 100 countries will gather later this month in Sendai, Japan, to finalize a new global framework for disaster risk reduction which will replace the 2005 Hyogo Framework for Action (HFA). The stakes could not be higher, especially for the countries of Asia and the Pacific — by far the most disaster-prone region in the world.

The year 2014 did not see a single large-scale Asia-Pacific earthquake or tsunami, yet 119 disasters still caused more than 6,000 fatalities and economic losses of almost US$60 billion, as storms, floods and landslides wreaked havoc.

Many developing and smaller economies remain highly vulnerable to natural disasters, and climate dynamics add to the risk. With the growing frequency and intensity of disasters, enhancing resilience calls for effective pre- and post-disaster frameworks that include supportive regulations, risk-based preparedness and mitigation approaches, as well as innovative risk financing mechanisms.

Ten years of HFA implementation have seen major investments and many successes, but new research by the United Nations Economic and Social Commission for Asia and the Pacific (ESCAP) points to five important lessons.

By 2011, the midpoint of HFA implementation, fewer than one Asia-Pacific country in five had fixed allocations for disaster risk management in national budgets, indicating significant gaps in achieving the right blend of financing. This needs to change, as the growing impact of disasters threatens to roll back development gains and undermine sustainable development. With multiple overlapping shocks and crises, countries ignore this lesson at great peril.

Second, innovative risk financing mechanisms such as catastrophic bonds and index-based parametric insurance must be seriously considered to overcome the challenges of traditional insurance systems. It is time to scale up such initiatives with support from Governments and private insurance companies.

Third, evidence-based policy-making will be key to successful implementation of the successor to the HFA. To support this ESCAP is developing a regionally-agreed core set of disaster statistics. Once implemented, these will strengthen diagnostics, national planning and policy-making, allowing for better baselines and regional analysis.

Fourth, science and technology is a powerful enabler of disaster risk reduction. Our ability to monitor and track storms has increased considerably over the past 20 years with advanced tools and instruments mounted on satellites which can now measure seasonal weather patterns, ocean currents and temperature – all of which support disaster preparedness. Greater investments to promote further enhancement in technology and cross-border coordination will be critical moving forward.

One of the promising areas is the struggle against drought. Advances in space technologies, being promoted through our regional cooperative framework, give us hope for rolling back this silent killer. ESCAP offers satellite generated data to high-risk countries, which, combined with ground observations, enables effective early warning. Droughts can now be detected much earlier than before, and action can be taken, for example, by adapting agricultural practices to conserve water.

Fifth, disaster early warning systems are increasingly effective in saving lives. These systems work best when they incorporate the full spectrum of activities from risk assessment and monitoring, to community preparedness and response. Over the past 10 years, there has been a significant expansion of observation networks. When the Indian Ocean Tsunami struck in 2004, there were only 13 broadband seismometers and four coastal sea level gauges sharing data in near-real-time for warning purposes. Today there are more than 140 broadband seismometers and more than 100 sea level gauges, all sharing data via the Indian Ocean Tsunami Warning System, which became fully operational in 2011.

Missing however are the right types of investments in community-based risk reduction. At this “last mile” of early warning systems, the provision of more timely and clearer warnings, effective guidance and more frequent drills for vulnerable and at-risk communities will go a long way in minimizing casualties and damage in times of crisis.

No government can tackle these challenges alone. Regional cooperation, public-private and other wider partnerships are essential. With the implementation phase of the new framework on disaster risk reduction about to begin, ESCAP will be working further with the Asia and the Pacific region, drawing on our long experience as the convener of regional cooperation.

The real challenge begins the morning after the Sendai Conference. Successfully implementing the new framework will require long-term vision and great political leadership, knowing that the fruits of investments in resilience may sometimes be harvested only years after a government has left office. With new global frameworks for disaster risk reduction, climate change action and the sustainable development goals all scheduled for finalization in 2015, there has never been a more important time for this visionary leadership.

Dr Shamshad Akhtar is an Under-Secretary-General of the United Nations and Executive Secretary of the Economic and Social Commission for Asia and the Pacific (ESCAP). She is also the UN’s Sherpa for the G20 and previously served as Governor of the Central Bank of Pakistan and Vice President of the MENA Region of the World Bank.