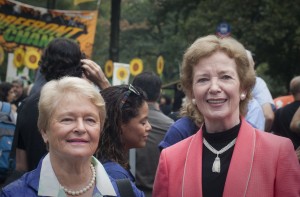 “No man is an island,” wrote the English poet John Donne. Five centuries after these lines were penned, they are acutely relevant when we consider the threat posed to all humanity by climate change. Small islands are particularly vulnerable as rising sea levels imperil their very existence, but increased emissions and temperatures mean we are all more vulnerable to climate-related disasters and their devastating consequences.

This is the backdrop to the World Conference on Disaster Risk Reduction being held in Sendai, Japan from March 14-18. There is a global consensus that a changing climate leads to changes in the frequency, intensity, duration and timing of extreme weather and climate events, and can result in unprecedented events.  Moreover, these disasters hit the poorest people and their communities hardest as we have seen time and again in recent years, from Typhoon Hyian in the Philippines to the recent floods in Malawi.

Yet even the richest countries of the world have struggled to cope with the increasing ferocity of climate-related natural disasters, from Hurricanes Katrina and Sandy in the United States to the damage wrought to the UK’s economy from flooding in 2014.

An effective response needs to be conceived at a global level and to start with an acknowledgement that this is a shared challenge and responsibility. “Every man is a piece of the continent” said Donne. In 2015, we can add that every man and woman is a piece of the whole planet. The Sendai conference should serve as a starting point for a coherent and integrated disaster risk reduction framework that builds on the Hyogo Framework for Action adopted in 2005 and promotes a people-centred preventive approach to disaster risk.

The backdrop is stark. Since 2005, over 700,000 people have lost their lives, over 1.4 million have been injured and around 23 million have been made homeless as a result of disasters, including natural disasters and climate and other human-made disasters. This undermines the enjoyment of the full range of human rights by millions of people. The total economic loss is more than $1.3 trillion, whilst between 2008 and 2012 some 144 million people have been displaced from their homes.

The international community has an environmental, economic and a moral imperative to act. 2015 sees the launch of the UN’s Sustainable Development Goals. They cover a broad range of issues from poverty reduction to nutrition, gender equality and environmental protection. It is obvious that credible progress in all these areas goes hand in hand with an effective approach to disaster risk reduction. There is no point, for example, in establishing a new maternal health clinic in a coastal village which risks being swept away entirely by rising sea waters. As Elders, we believe that reducing vulnerability to both natural and human-made hazards is the key to building resilient communities and societies. Only empowered and resilient communities operating in the context of global solidarity can ensure a just and equitable policy framework for tackling disaster risk and climate change.

Thus, we call on the UN to place greater emphasis on disaster risk reduction so that it receives greater emphasis in the SDGs and their measurement metrics, and for policymakers to base their work on meeting the needs of people living in vulnerable situations all over the world. More attention needs to be given to the underlying drivers of risk such as poverty, inequality, weak governance, declining ecosystems and conflict. Above all disaster response has to aid recovery and reduce the risk of future disasters.

An effective, holistic approach to disaster risk reduction must be people-centred and take into account gender inequality and the vital role women play in building community resilience. Women are not only particularly vulnerable to disasters, they are also front line actors in disaster preparation and response; their participation in disaster planning needs to become common practice.

The stakes at Sendai are high, but we remain optimistic that a positive outcome will be reached. People around the world, from civil society to corporations, are increasingly aware that 2015 is the year when tough decisions need to be taken. As Elders, we will continue to campaign for a just and equitable solution to the world’s climate challenge with human rights and solidarity at its centre.

Mary Robinson was the first woman President of Ireland (1990–1997) and is a former United Nations High Commissioner for Human Rights (1997–2002). As an academic, legislator and barrister, she sought to use law as an instrument for social change. A tireless advocate for justice, she was President of Realizing Rights: The Ethical Globalization Initiative from 2002 to 2010. She now leads efforts to ensure that the most vulnerable populations in the world do not disproportionately suffer the effects of climate change as Chair of the Mary Robinson Foundation – Climate Justice. In March 2013, she was appointed UN Special Envoy for the Great Lakes Region of Africa. She stepped down from this post in July 2014 to become the UN Special Envoy on Climate Change.

Gro Harlem Brundtland, a medical doctor, was Norway’s first woman Prime Minister, serving a total of ten years as head of government between 1981 and 1996. She chaired the World Commission on Environment and Development – known as the Brundtland Commission – which articulated the principle of sustainable development for the first time at a global level. She was Director-General of the World Health Organization from 1998 to 2003, UN Special Envoy for Climate Change from 2007 to 2010 and, from 2011 to 2012, was a member of the United Nations Secretary-General’s Global Sustainability Panel.

Mary Robinson and Gro Harlem Brundtland are both members of The Elders, the group of independent leaders working together for peace and human rights.