How can the world better prepare for natural disasters?
By Margareta Wahlström 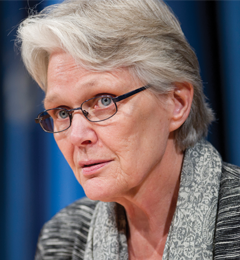 It is no longer business as usual. From major global businesses to SMEs to small local producers, economic losses from disasters are a growing threat to business continuity and sustainability. The news last week that the share price of a small Irish insurance company dropped 12% on the Dublin Stock Exchange did not grab any major headlines. However, the fact that its financial losses for 2014 were triggered in part by record claims for winter storm damage is an indication of how businesses across the world are feeling the impact of disaster risk, amplified by climate change.

The accumulation of such small announcements is just as significant as a major disaster event like the floods in northern Thailand in 2011 that did serious damage to the car industry as global supply chains, dependent on manufacturing plants located on flood plains, were severely disrupted. GDP in Thailand fell by 9% in the last three months of 2011 compared with the same quarter in 2010. GDP also fell in Japan in 2011 after the Great East Japan Earthquake and Tsunami, which generated direct losses of over $200 billion.

The increasing collision of the world of business with disruptive phenomena such as intense storms and floods, earthquakes and volcanic ash clouds, explains why the private sector will be represented in greater numbers than ever before at the UN gathering, which kicks off in Sendai, Japan, on Saturday.

The Third UN World Conference on Disaster Risk Reduction will mark a coming of age for the world’s business community as it plays a key role in the opening act of the post-2015 Development Agenda, which will see major new interlocking frameworks adopted by UN member states on disaster risk reduction, sustainable development goals and climate during the course of the year.

As Secretary-General Ban Ki-moon said last week at the New York launch of the 2015 Global Assessment Report on Disaster Risk Reduction: “Sustainability begins in Sendai” and it is essential that the private sector is engaged.

A concerted effort has been under way for some years now by the UN Office for Disaster Risk Reduction to bring the private sector in from the cold in order to take on a role in improving how we manage not only disasters but also how we manage disaster risk so that we avoid losses in the first place. They participate regularly now in regional meetings in Asia, Africa, the Americas, the Middle East and the Pacific.

Business people were certainly overlooked at the last world conference in Kobe, Japan, in 2005, when the focus was very much on developing a framework agreement which would reduce mortality from disasters after the loss of over 227,000 lives in the Indian Ocean tsunami in 2004. Since then we have seen a staggering escalation in economic losses from disasters, which act as a serious brake on sustainable development, job creation and the availability of funds for poverty reduction programmes, health and education.

Absolute losses may be highest in economic powerhouses like China, the USA and Japan, but they are also better equipped to sustain the impact of those losses. Disasters pose an existential threat to those involved in tourism in small island developing states or managing agribusiness investment in drought-prone countries. One intensive event could spell bankruptcy.

A key area of concern for UNISDR’s Private Sector Advisory Group is the fact that insurance pricing often does not reflect risk levels or provide an adequate incentive for risk-sensitive business investment, particularly in low- and middle-income countries with low penetration rates but rapidly growing markets.

One response has been the launch of the R!SE Initiative which seeks to reform how risk is viewed on corporate balance sheets and to encourage disaster risk-informed investment strategies.

The private sector is also an important player when it comes to ensuring that infrastructure and public utilities, such as roads, energy supply, water systems and telecommunications are built to high standards, are risk-proof and located away from hazard-prone locations wherever possible.

UNISDR now estimates that losses from disasters are running at between $250 billion to $300 billion a year. New and additional losses are set to grow dramatically in the coming 15 years when it is estimated by the Global Commission on the Economy and the Climate that $90 trillion will be invested in new infrastructure. If $6 billion or 0.1% of that money were set aside each year for investment in disaster-risk management, then that would result in avoided losses of $360 billion over the whole lifetime of the particular investment. Typical cost-benefit ratios lie in the range from 3:1 to 15:1. The European Union states that €1 invested in disaster-risk reduction saves from €4 to €7 in disaster response.

At the World Conference, business leaders will be asked to contemplate some difficult future scenarios simply because we want to avoid them. They are stepping up to the plate and participating in over 30 working sessions from reducing disaster risk in urban settings to risk-sensitive investment to disaster risk in the financial system.

The new framework for disaster-risk reduction which will emerge from the World Conference will be an inclusive one, taking on board the views and inputs of a wide range of major groups, including the private sector. It will recognize the need for the public and private sectors, businesses and local communities to work more closely together to reduce existing levels of disaster risk and to avoid the creation of new risk.

Change happens by making something so attractive and affordable that everyone chooses it. What could be more affordable than a small investment and a change in attitude which keeps your business going despite a flood, a storm or an earthquake?

Experience tells us that nobody is quicker at understanding the economic benefits of disaster-risk reduction than business people who have experienced losses first-hand. At Sendai, there will also be plenty of people on hand to tell positive stories of investments that reflect well on their industries because they stayed in business and were there for customers, employees and others in their hour of need.

Employment and business revenues declined for many SMEs in Christchurch, New Zealand,after the 2010 and 2011 Canterbury earthquakes, but $6 million invested in seismic-strengthening work by Orion, the local electricity distribution company, saved more than $65 million in direct losses and kept a vital service going.

That sounds like the future we all want to emerge from Sendai: a safer and more resilient planet.

Margareta Wahlström is the UN Special Representative of the Secretary-General for Disaster Risk Reduction. She has extensive experience in both disaster relief operations and disaster risk management, with the United Nations system and the International Federation of Red Cross and Red Crescent Societies. Her broad experience spans conflict and non-conflict emergencies, and addressing long-term issues of sustainable development. She is also the head of UNISDR, the United Nations Office for Disaster Risk Reduction, the focal point in the United Nations system for the coordination of disaster reduction.

This post was first published by the World Economic Forum.