The disaster reality that must change
By Rachel Kyte 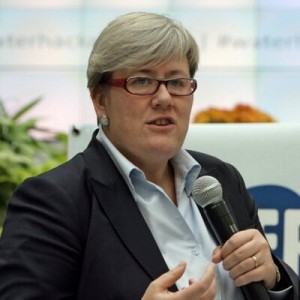 It’s one of the harsh realities of today.

Just as representatives from around the globe began to gather in Sendai, Japan, for an international disaster risk conference, authorities in Vanuatu were issuing evacuation alerts with Cyclone Pam intent on a destructive path towards the Pacific island nation.

On the eve of the official opening of the World Conference on Disaster Risk Reduction in Sendai, three cyclones – including the ferocious Cyclone Pam – were casting a menacing shadow over the Asia Pacific region.

It underscores a simple point. The threats posed by natural disasters are on the rise.

We all know the global community has paid – and continues to pay – a hefty price tag for disasters. The average annual number of disasters has almost doubled since the 1980s. Costs have climbed from US$50 billion a year in the 1980s to just under $200 billion a year in the last decade. Almost 75 percent of the losses can be put down to extreme weather events.

Equally we know that an ounce of prevention is worth a pound of cure. The evidence tells us investing in prevention before disaster strikes takes far less of a toll on people, their communities and their economies.

Yet we, as a global community, seem caught in an endless cycle with disasters. We’re captured by the visual images and often horrifying tales of lives lost, loved ones saved, businesses and homes swallowed by seas or reduced to rubble in an earthquake.

And we know empathy with disasters knows no borders. Earthquake victims whether in Turkey, New Zealand or Haiti all share the same pain.

Many of us heed the calls for assistance that follow disasters. But our interest often wanes when the camera lenses turn elsewhere.

It’s a cycle that has to end. We, as a global community, haven’t yet found the way to ensure that we build up skills and resilience of people and their communities to withstand disaster.

The tools are there. We know what works – whether it be building up coastal embankments in Bangladesh, or retrofitting schools in Peru to withstand natural hazards, or investing in early warning systems in countries like Ghana, or installing dedicated irrigation systems to help farmers deal with drought, grow and earn more.

And we know governments and communities that factor disaster risks into their development planning will help ensure the infrastructure of the future can deal with the climate of the future.

The meeting in Sendai offers a path forward – if it marks a shift in the way in which we invest in resilience of people and their communities, fund the means to help people adapt to the vagaries of the weather, and build back better from the bottom up.

As countries like Vanuatu and others in the Pacific Ocean know only too well, disasters hit developing countries the hardest.

But they are also the ultimate leveler. No one can escape if they are in the way of a cyclone or other natural disaster.

By virtue of its geography, Vanuatu is yet another case of a country in the path of a storm in a world shaped by climate change.