Why Sink When You Can Swim? Engaging Small and Medium Enterprises in Disaster Risk Reduction
By Prim Yuktadatta 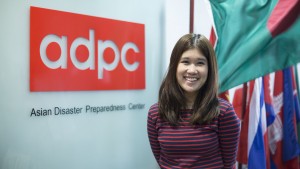 Small and medium enterprises (SMEs) are the largest group of business and the backbone of the global economy. At the same time, they are one of the most vulnerable groups to natural disasters. In an aftermath of the 2011 floods in Thailand, ADPC assisted the Deutsche Gesellschaft für Internationale Zusammenarbeit (GIZ) to conduct an assessment study on the impact of Thailand floods to the private sector, particularly SMEs. Findings show that a total of 240,000 SMEs in 32 provinces were affected by the unprecedented floods, which then caused difficulty to 670,000 workers and decrease in GDP of 24 million baht. Global supply chains were also disrupted when the leading hard drive makers including the Western Digital, Seagate and Hitachi were inundated and needed to suspend their operations which later led to a global shortage of hard disk drive for months.

The flood in 2011 has proved that disasters are costlier than we thought and that relief measures alone are not sufficient to allow SMEs and the nation’s economy to bounce back to normal. The incident further allowed ADPC to come up with the initiative to promote resiliency in SMEs to preserve economy and community. We have worked with the Department of Disaster Prevention and Mitigation (DDPM) and the Office of Small and Medium Enterprises (OSMEP) to improve disaster resilience of SMEs in Thailand by increasing their level of awareness and capacity in dealing with disasters through the development of business continuity planning (BCP). Currently, over 60 government officials and more than 100 SME entrepreneurs were trained by us to develop the proper BCP and transfer the knowledge to others in the industry.

From my own experience, working with SMEs on disaster risk reduction is not easy. Most of SMEs have the short term perspectives on their businesses in comparison with larger enterprises and are merely concerned about financial issues and making profits. They tend to perceive disasters as external risks partly due to the occurrence and frequency of disaster events. Therefore, disaster risk management has rarely been integrated into the business plans of SMEs. Also, most of them believe that disaster management plan such as BCP would bring the additional cost to their budget.

In order to successfully advocate SMEs in disaster risk reduction, we should avoid using the pure ‘disaster language’ to communicate with SMEs. We also need to help them understand the difference between having the emergency response plan/ fire drill and BCP. Linkages between BCP and profits need to be built. For example, the fact that BCP can increase the competitive advantage and enhance customer confidence of one’s company must be highlighted and disseminated in the form of successful case studies to the SME community.

Recently, ADPC has launched a facility called iPrepare Business, that seeks to provide technical support to entrepreneurs in dealing with the increasing disaster risks in Asia. iPrepare Business will also support governments in identifying priority actions for strengthening SME resilience to disasters and facilitate the knowledge management and dissemination. Visit Facebook Page IPrepareBusiness and Twitter @iPrepareBiz for further information.