Managing disaster risks can bring other benefits, even if catastrophe never strikes
By Tom Tanner 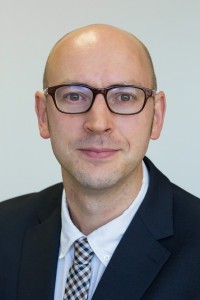 This week, the UN World Conference on Disaster Risk Reduction in Sendai, Japan kicked off a pivotal year for disasters, climate and development. 2015 is playing host to an exciting mix of ideas, politics and pragmatism as new global deals are also struck on development finance, sustainable development goals, and climate change.

These agreements will all influence the resilience of societies and economies to withstand disaster shocks and other more gradual stresses. But while much attention is likely to focus on targets, international finance, and national action, we need to keep sight of the key challenge: how can we incentivise investment in managing disaster risk?

For some, the main driver of action involves getting the overarching targets and indicators right, and this is likely to likely to play a major role in the Sendai negotiations. For others, incentives for action are primarily a resourcing issue, as investment before disasters strike remains a fraction of humanitarian spending after the event. International financing for disaster risk reduction has been highly erratic and has totalled less than 0.4% of overall aid, with most resources flowing to a small number of middle-income countries. There are some reasons for optimism however, from the commitments to finance in the UN Green Climate Fund to the growth in domestic resources being mobilised for tackling disasters and adaptation to climate change.

Those with a more political view of DRR have highlighted the range of perverse incentives that constrain pre-emptive action on resilience building. Managing disaster risk tends to lag behind other priorities, with benefits occurring over timescales that are longer than political cycles, often with intangible actions that are more difficult to sell to voters than more visible post-disaster support.

But what if it also comes down to not adding up the costs and benefits of disaster risk management in full? For example, the decision to invest in a flood control measure is usually based on a comparison of the costs of building a levy against the benefits of avoiding flood damaged homes and economic disruption. But does this ignore the benefits that would occur if the waters never rise?

The report Unlocking the triple dividend of resilience launched by the Overseas Development Institute (ODI) in Sendai in partnership with the World Bank’s Global Facility for Disaster Reduction and Recovery (GFDRR) spells out how investments can yield a triple dividend. Adding to growing understanding of the multiple benefits of pre-emptive action through a ‘resilience dividend’, this argues that although saving lives and avoiding disaster damages remains crucial, the sheer risk of a disaster can itself cause economic inefficiency and losses even before disaster strikes.

A high expectation of disasters – known as ‘background risk’, as well as the actual experience of disaster events, makes individuals less willing to take positive decisions to innovate and invest in certain areas and activities. For example, an investor looing to set up a factory in Bangkok might be more cautious to do so without being sure of the flood management measures in place. Background risk also distorts labour markets. For example, if a households in Bangladesh has to take up multiple back-up jobs in case flooding damages one of the sources of income, then they are unable to specialise in the most productive (and best paid) job.

Disaster risk management measures can help reduce background risk, with households and firms more likely to take higher-risk and higher-return investment decisions as a consequence, helping to drive economic growth and poverty reduction. Reducing background risk also helps governments plan for the long term and attract investment, without worrying about the sudden shocks to revenues and government spending that disasters can bring. A third dividend is also generated by investments in resilience, as even without a disaster events, these often deliver social, environmental and economic co-benefits, such as shelters being used as schools or training centres, or biodiversity gains from tree planting on landslide-prone hill slopes.

If we fail to make the business case for investment in disaster risk management, disasters will continue to frustrate and even reverse development progress. By highlighting dividends and co-benefits even in the absence of a disaster event, and by linking DRR investments with the agendas that most matter, such as jobs, growth, security and health, we can scale up and mainstream investments across all sectors so that in future communities can better weather the storm. 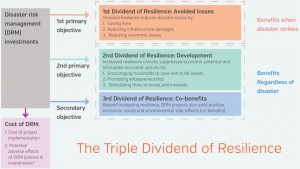 Tom Tanner is a Research Fellow at the Overseas Development Institute. He leads ODI’s work on adaptation and resilience. He is a development geographer with research interests in the politics of climate change policy processes; organisational change; poverty, vulnerability and climate adaptation; children and disasters; and building resilience in urban contexts. He has 20 years of experience as a researcher, policy maker, practitioner, and negotiator in UN conventions on climate and desertification.