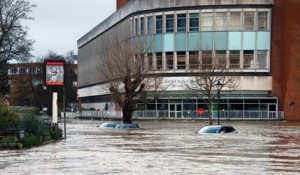 A lack of responsibility and funding leaves the majority of European cities unprepared to deal with the worst impacts of climate change. Continued government inaction could see our economic hubs face billions of Euros in damages each year by the second half of the century.

As delegations of cities and regional authorities met in Sendai to discuss how they can better protect themselves from the impacts of natural disasters at the UN World Conference on Disaster Risk Reduction, a new analysis by E3G highlighted how ill prepared European cities are to deal with the growing risks from climate impacts.

“Underfunded, Underprepared, Underwater? Cities at Risk”, which brings together for the first time the different pieces of knowledge on climate risks to European cities, finds a lack of power, funding, capacity and information leave regional authorities incapable to step up to the responsibilities handed to them by their national governments.

With 78% of European citizens living in cities and 85% of the EU’s GDP being generated in these economic hubs, the importance of effective climate risk management cannot be overestimated. The infrastructure failures caused by hurricane Sandy in New York in 2012 and the huge economic costs induced by the eight meter-high floods witnessed in Dresden during the 2013 Elbe flooding give a preview of the complex failures that are becoming the “new normal” which cities must navigate.

Over the past three decades, Europe has seen a 60% increase in extreme weather events. In early 2014, flooding and winter storms caused an estimated €20bn in economic damages in the UK alone. The 2003 summer heat wave caused between 55,000 and 70,000 deaths across Europe. Experts estimate that, unless action is taken now, economic costs to EU cities could reach over €190bn annually by 2070.

Yet, despite will and best efforts, many cities are unable to protect themselves against these risks, as they are working on limited resources and with no guidance. Governments are shifting responsibility for climate risk management to city administrations, but do not provide them with powers to act. On the contrary, many cities have faced budget cuts from their central governments over the past five years.

The lack of assistance cities receive from their central governments threatens the well-being of our citizens and economy. It is absolutely fundamental to establish now how cities can be better supported.

The report proposes several solutions to address the current shortcomings. First and foremost, governments must be clearer on who is responsible for managing climate risks and ensure that national and regional infrastructure investments are consistent with a 2, 3 or 4°C warmer world. As part of this transition, new duties on public bodies must be introduced, and companies need to disclose the physical and economic risks from climate change to the public, their shareholders and their operations.

Most businesses don’t include climate risks in business strategy – but if risks are not disclosed they cannot be properly managed. It’s time for an honest dialogue on what climate risk means for business and how governments and cities can assist in managing them.

Rosalind Cook is Senior Policy Advisor and Nick Mabey, Chief Executive, of E3G, an independent, non-profit European organisation operating in the public interest to accelerate the global transition to sustainable development. The report ‘Underfunded, Underprepared, Underwater? Cities at risk’ can be found on E3G’s website at http://e3g.org/x2tTb