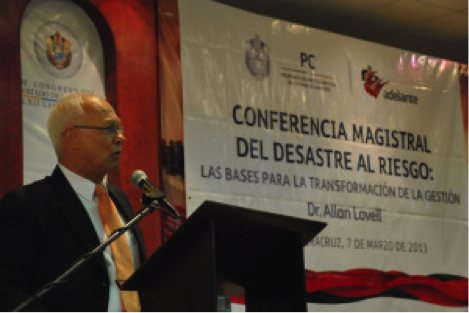 Born in Britain but based in Latin America for much his career, Allan Lavell is a respected researcher and practitioner in disaster risk reduction. His work in the field spans nearly three decades, and is marked by multidisciplinary, multi-actor, holistic, participatory and comparative approaches. He also emphasises the importance of north-south and south-south collaboration, primarily in Central America and the Andes, but also throughout Latin America and the Caribbean, as well as parts of parts of Africa and Asia. Through academic research and the development of theoretical, as well as practical concepts, he has dedicated himself to clarifying and disseminating knowledge on the processes that lead to disaster risk.

Mr. Lavell was a founding member of the Network of Social Studies in the Prevention of Disasters in Latin America (LA RED) in 1992, and combined with his long-term relationship with the Latin American Social Science Faculty (FLACSO), that has enabled him to achieve a position of influence within the region and beyond. He says that he believes that his contribution to shaping the future has been achieved primarily through the development and dissemination of notions, ideas, concepts and empirical evidence gained from and through academic research and published in dozens of books, journals and web sites. The research he has coordinated and undertaken has a wide thematic range, including options for prevention and mitigation in Central America, approaches to post impact response and reconstruction in seismic disasters, as well as urban community vulnerability to disasters, retrofitting, and climate change adaptation and disaster risk management. His work on urban risk used widely to guide research and design new intervention strategies, emphasising risk construction as opposed to the disaster itself. He has also contributed to change through consultancy work, with mission worldwide in Latin America and the Caribbean, Africa, Asia and Australasia, with more than 20 international agencies, NGOs and governments. It is his firm belief that change is the product of communication, discussion, knowledge, dissemination, stakeholder involvement and commitment and agreement on concepts and notions, backed by concrete evidence.