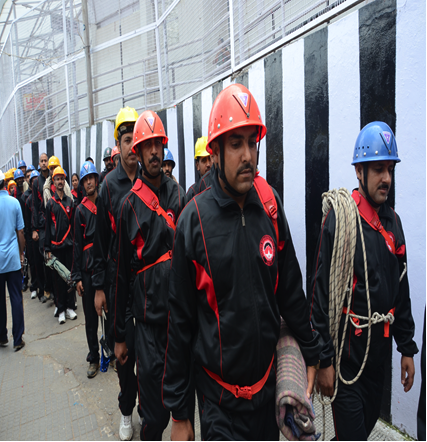 India’s holiest shrine, the Shri Mata Vaishno Devi, is located in the picturesque Himalayan range. Lying 1,585 kilometres above sea level, it is at the heart of a 22-kilometre trekking area and a major pilgrimage site. Set up three decades ago, the SMVDSB encompasses 2,750 staff at the various shrine sites, as well as rescue and security services. In 2009, it launched a programme to reduce the risk of disasters in the area and bolster resilience in the face of hazards such as landslides, earthquakes, flash floods and forest fires. The plan emerged after it became clear that despite vulnerability to hazards, many staff lacked professional training to handle emergency situations, that there was a failure to respect safety codes, that communication systems were rudimentary, and that there was a shortfall in equipment.

Major components of the SMVDSB programme include capacity building training to provide basic skills that actually help staff in their daily lives. They range from using commonly available material such as wet jute bags to douse fires, administering cardio-pulmonary resuscitation to pilgrims with cardiac arrest, checking the pulse, or carrying an injured to nearest location of medical assistance without any help. To ensure the sustainability of the programme, a dedicated disaster management task force was set up, with in-house master trainers who work with staff to ensure they fell a sense of ownership of risk management. In addition, the SMVDSB has worked to reduce its carbon footprint, replacing florescent and incandescent lamps with an energy efficient lighting system along the entire track, and uses battery-operated vehicles instead of fossil-fuel driven car. It has also applied structural measures to ensure compliance of safety measures in old buildings, installing fire safety equipment and razing unsafe structures when necessary, as well as posting warning signs about landslide-prone areas that give directions and evacuation routes. In addition, it has bound slopes with netting, nails, and trees to protect and against landslides and rockfalls in vulnerable stretches. To further protect visitors, revamped control rooms are now equipped with robust communication networks, including screens for monitoring closed circuit television cameras at various locations, and optical fibre cable has been spread over the entire track to ensure real time connectivity. In September 2014, the region suffered from incessant rains and consequent floods that left more than 200 people dead and affected thousands of families. However, there was no loss life and property along the entire shrine track, and more than 17,000 stranded people were safely evacuated.